Going North as a Family

Teach For Canada teachers Pamela and Gideon Thwaites decided to move to Eabametoong First Nation with their son Gabriel in September 2019. Pam grew up in St John’s Newfoundland, Gideon in Cape Town, South Africa, and they had been living and teaching overseas prior to coming back to Canada. We interviewed the whole family to ask what it has been like moving to Eabametoong First Nation together. 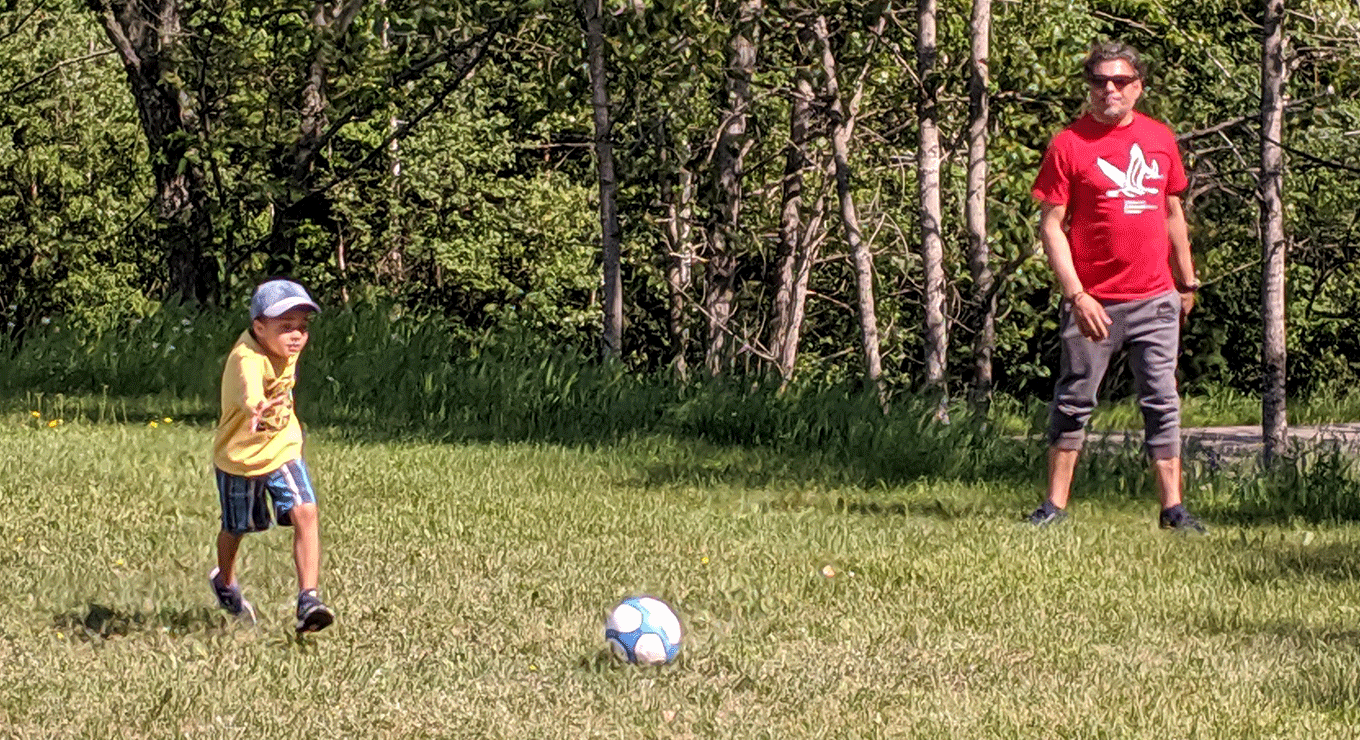 Teach For Canada teachers Pamela and Gideon Thwaites decided to move to Eabemtoong First Nation with their son.

What inspired you to move North and teach in a First Nation?

Pam: I have always been interested in the adventure of the North – I just had never had the opportunity to go there. I started to teach internationally, and then every time I came home, it was just too far or remote. Gideon and I watched a documentary on a plane while we were heading to South Africa about ten years ago. It was about the forced removal of Indigenous Peoples to remote parts of northern Canada. Gideon was surprised and appalled as a similar event had occurred in South Africa. It was referred to as the Group Areas Act. We both reflected on the injustices done to families affected by this in our respective countries.

Gideon: You did mention it, that you had wanted to go back and teach in a First Nation. But I had no clue until I watched that video, and then I was very interested.

Pam: Well, when I was in university, my professor was from northern British Columbia, and my major was in Canadian literature. She was really knowledgeable about Indigenous history, culture, literature, and it inspired me. So, I was starting to think about it even then, when I was 20 or 21.

The Thwaites family has enjoyed spending getting to know community members at community events.

Gideon: It’s been such a peaceful transition here into the community. And we’ve just been overwhelmed with the beauty of the landscape. We’re always in nature here, there are no roads.

We’ve had a lot of memorable moments already – for example, we had only been here for two weeks when the school administration said “Alright! Staff outing!” and school closed early and we were taken to an island with colleagues and members of the community to go fish and have a fish fry. You can’t dream this up. It was one of the most fantastic moments. So, we’ve just been overwhelmed by the friendliness of the community.

I also really love the dogs – the dogs own you! Like, “you’ll be my human being for the day.” 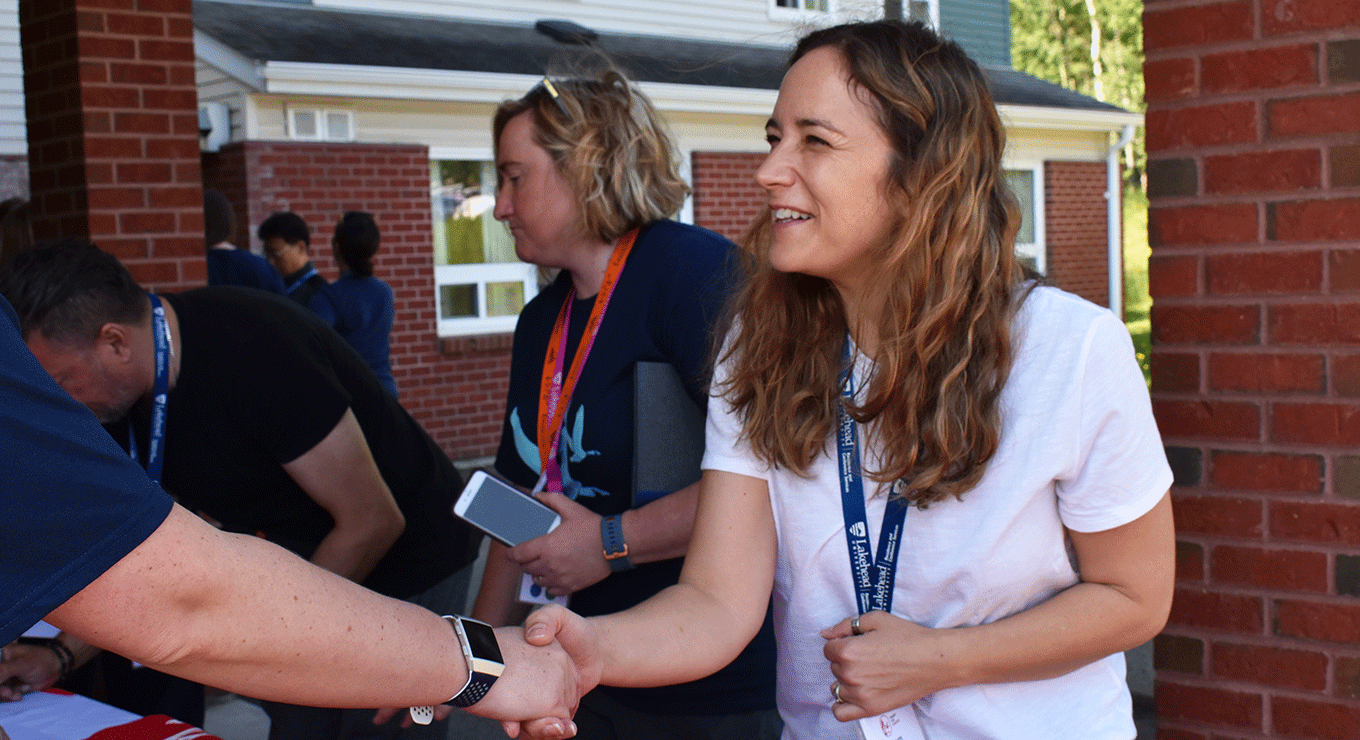 While the Summer Enrichment Program helped prepare Pam and Gideon, they still had to learn a lot about Eabametoong First Nation.

Have there been any particular challenges you weren’t quite prepared for?

Pam: I remember being in a session during the Summer Enrichment Program and we talked about how the concept of time is different in a First Nations community. It’s true – and a lot of other concepts are different here too. You have got to shift your way of thinking. Which has been easy enough for us to do because we do it everywhere we go, but just knowing what those differences are can be helpful.

For example: play dates. We’re a family and we have a little boy. In certain parts of the world, you just make a playdate and you know, Little Johnny can come over to play and the mom and I can have tea. But when I got here, I thought, “how do playdates work here?”  Gabriel would ask me, “when can I have my friend from school over for a playdate?” I must have mentioned the idea of a playdate to his friend’s dad five or six times. Then, a couple of weekends ago, this friend showed up with his dad on his Skidoo and knocked on our door and that was it. And then the next day, they picked him up for sliding. So it happened when it happened!

Gideon: When community members ask you to do something, they are opening a door for you. I can be sitting here now and the principal who lives across the street might come across and say “one minute!” and in one minute, I’m ready to go! We’ll go collecting wood or cutting a path for the Skidoo trails in the bush.

Pam: You need to be part of the community first, and people need to get to know you and feel comfortable with you and it takes a bit of time. And it can’t just be through working together. Going out in the bush, going over to people’s homes, going on the hill sliding with the kids, and then eventually you’re in there, and then it’s easy. 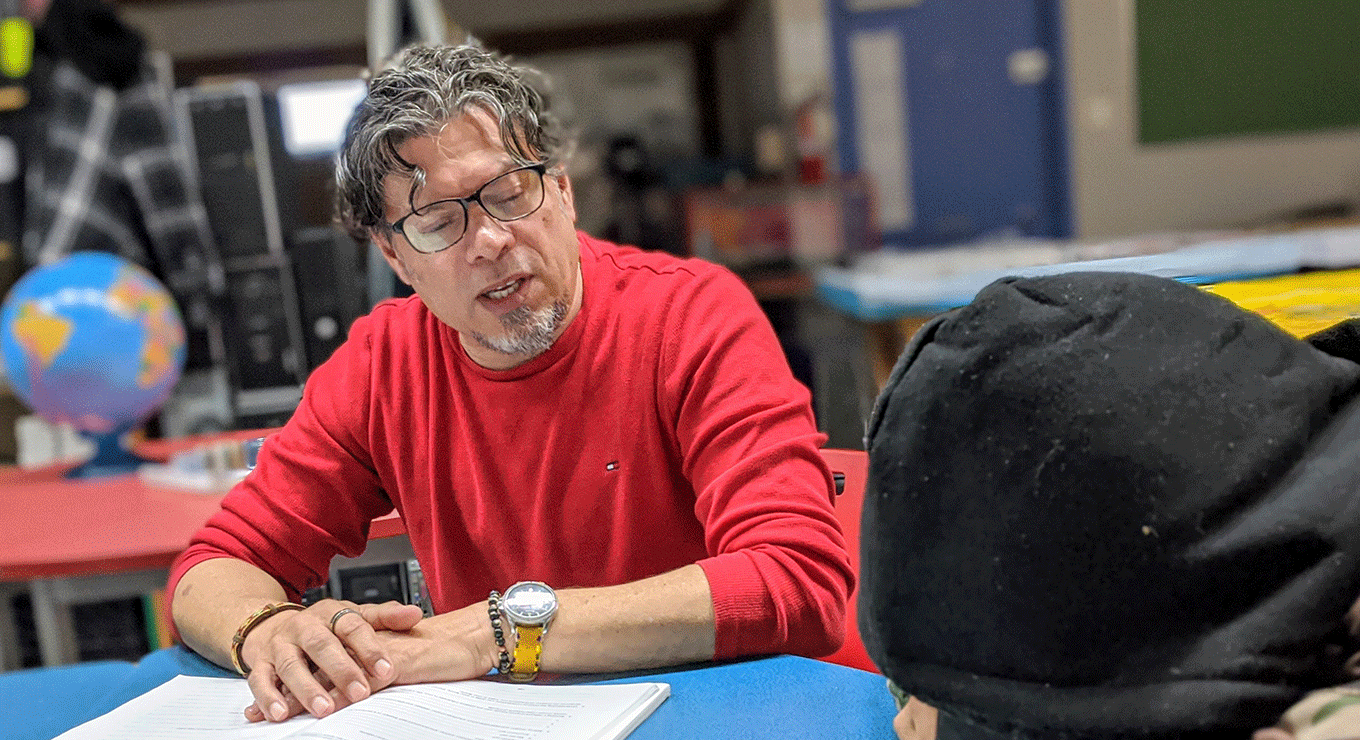 Pam and Gideon emphasize the importance of getting to know your students and the community.

Gabriel, what has been your favourite part of moving up North?

What about school? What is your favourite thing to learn?

Gabriel: Going to the gym. 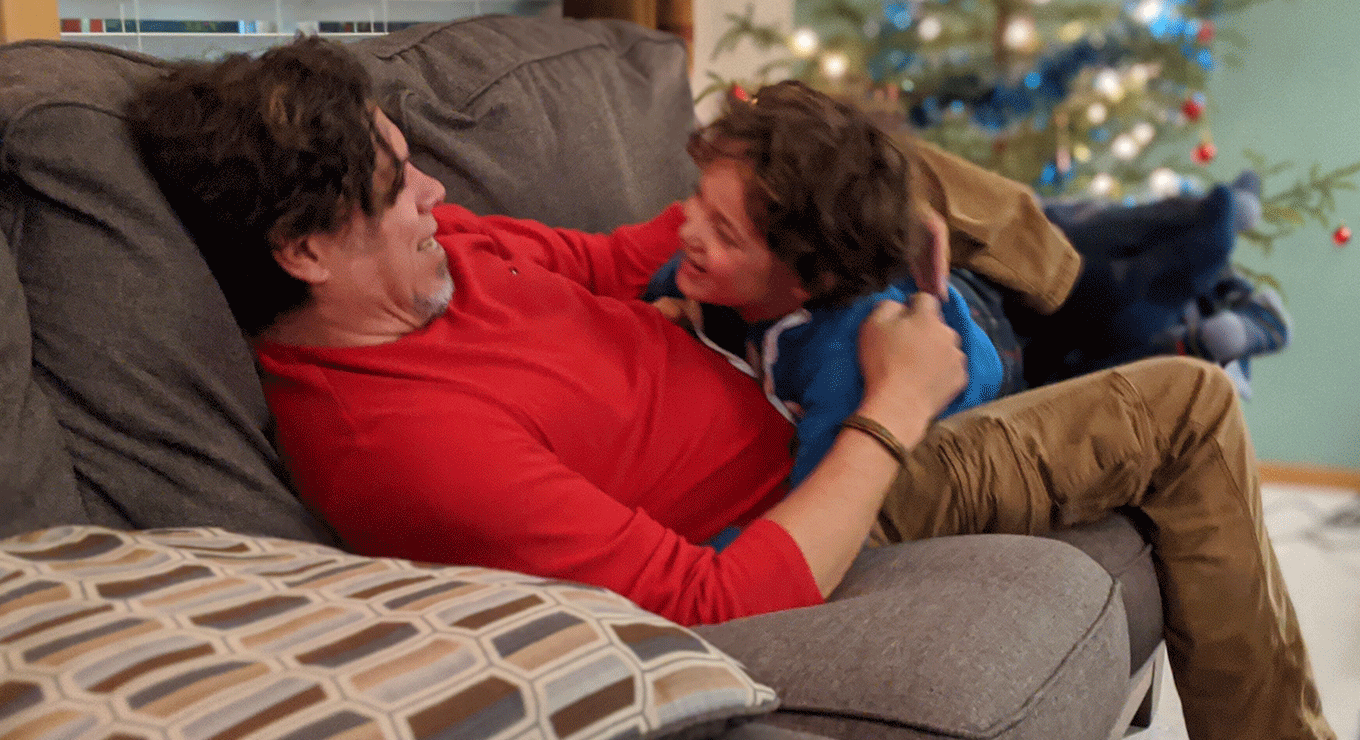 Gabriel enjoys spending time with his parents and friends!

When Gabriel is older, what do you hope he remembers from his time in the North?

Pam: All of the outdoor experiences. Gabriel came camping for three days with our students and that was the first time he had been camping like that before. We dressed him warmly and he had a wonderful time. If you are too overprotective then they miss out on all of that stuff. So, that connection to nature, that’s the one thing I hope he’ll take from this place.

And just an appreciation for the basics and simple things in life. We don’t need to have a big, fancy house or lots of nice new things. Our home is modest, but it’s cozy and warm. We have to walk to get water, but that’s okay. It’s a good reminder of how much we actually have.

Gideon: Before, we had the luxury of opening the tap and having water… and there were a couple of days here when the water was shut down and they only had emergency water at the radio station. It makes you humble, grateful for what you have. 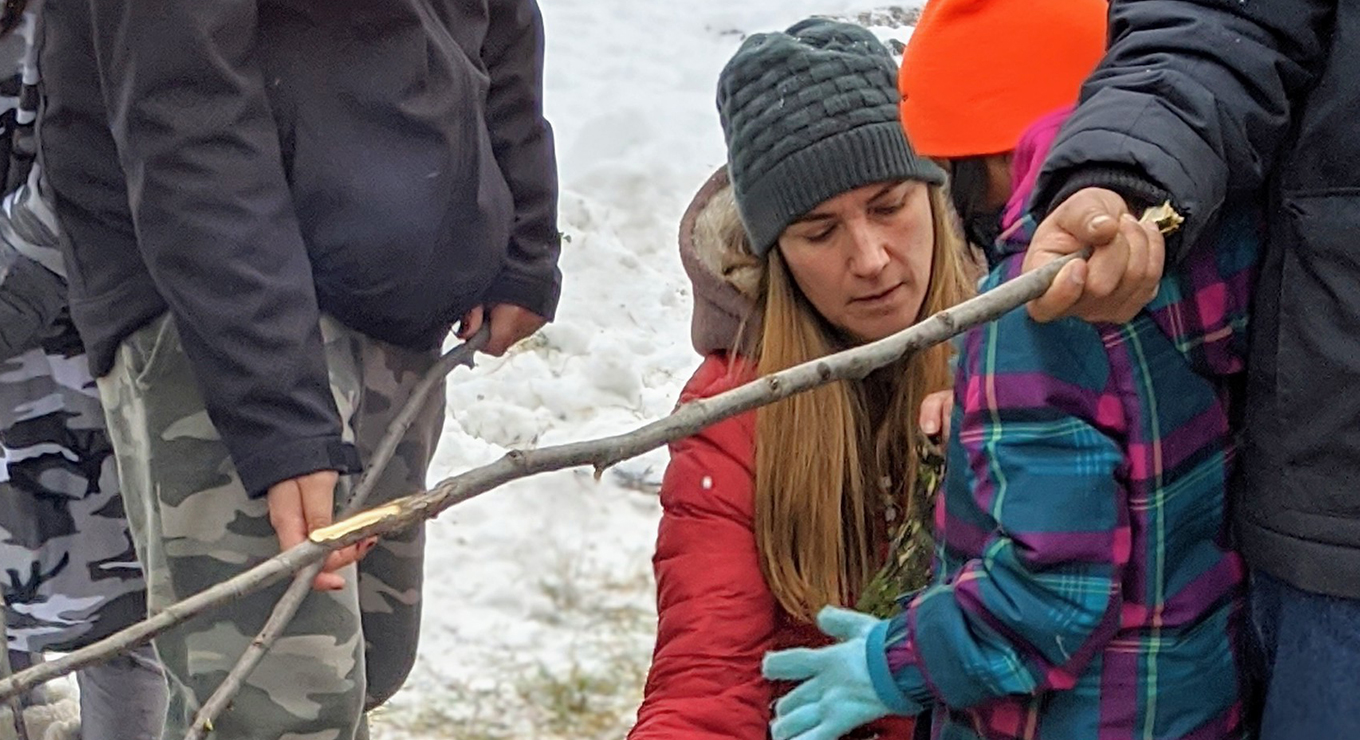 It was important to Pam and Gideon that they asked a lot of questions during the matching process.

Do you have any advice that you would give other families that are moving up North?

Pam: We declined a job in one community because we had a chat with the principal. They were very honest and let me know they didn’t often have enough certified teachers for our son’s grade at their school. It’s such an important age and I wanted to make sure that we felt comfortable wherever we were going to end up. I think it is important that you do your homework and ask lots of questions throughout the matching process. You have to know that you are making the right decision for your family when you make it. 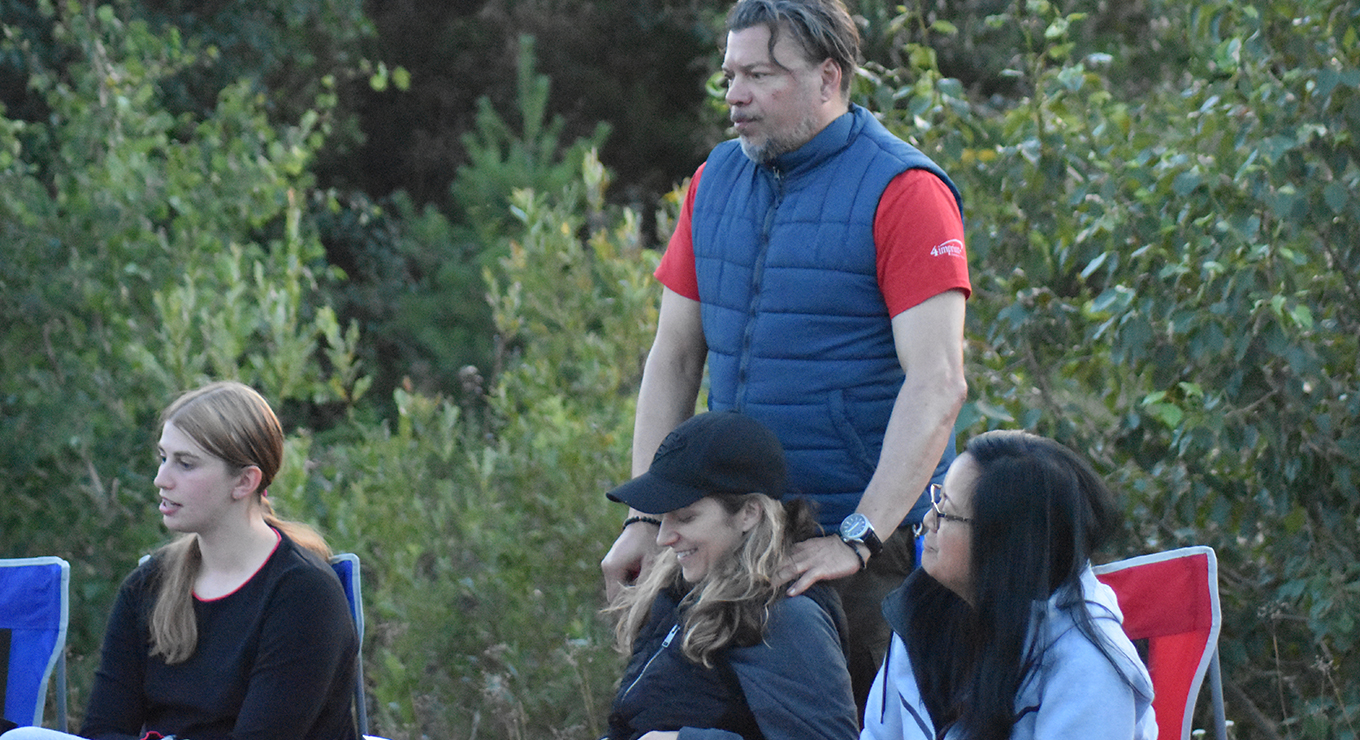 Sharing good moments with students has been a highlight for Pam and Gideon.

Have there been any particular moments with your students that really stood out to you?

Pam: I really love seeing how my students interact with our son, Gabriel, when he visits me in my classroom. The students are caring, better behaved, and totally accepting of him. They will just get on the floor and play, and I really love that. It shows that they have such big hearts, and they are so loving and family-oriented. Even the toughest student I have in my class, I know he’s just putting on the tough-guy act, but deep down he’s a big kid, and I see that when he plays with Gabriel. So, that has been a really heart warming experience for me.

I’ve also had a student who hadn’t been coming to school for several years. This student finally came back into the classroom because of some positive influences in his life. He has been 110 percent focused. Since he’s come back to school, he’s already won two awards. In the previous years, he must have had some really good teachers and he probably really loved school, but for other reasons, unknown to me, he was not able to attend Grades 5, 6 and 7.  After getting through the first few weeks, which was understandably pretty tough, he now he doesn’t want to leave the classroom at the end of the day! And thinking about this, just makes it all worthwhile.

Interested in teaching in a northern First Nation? Apply now.