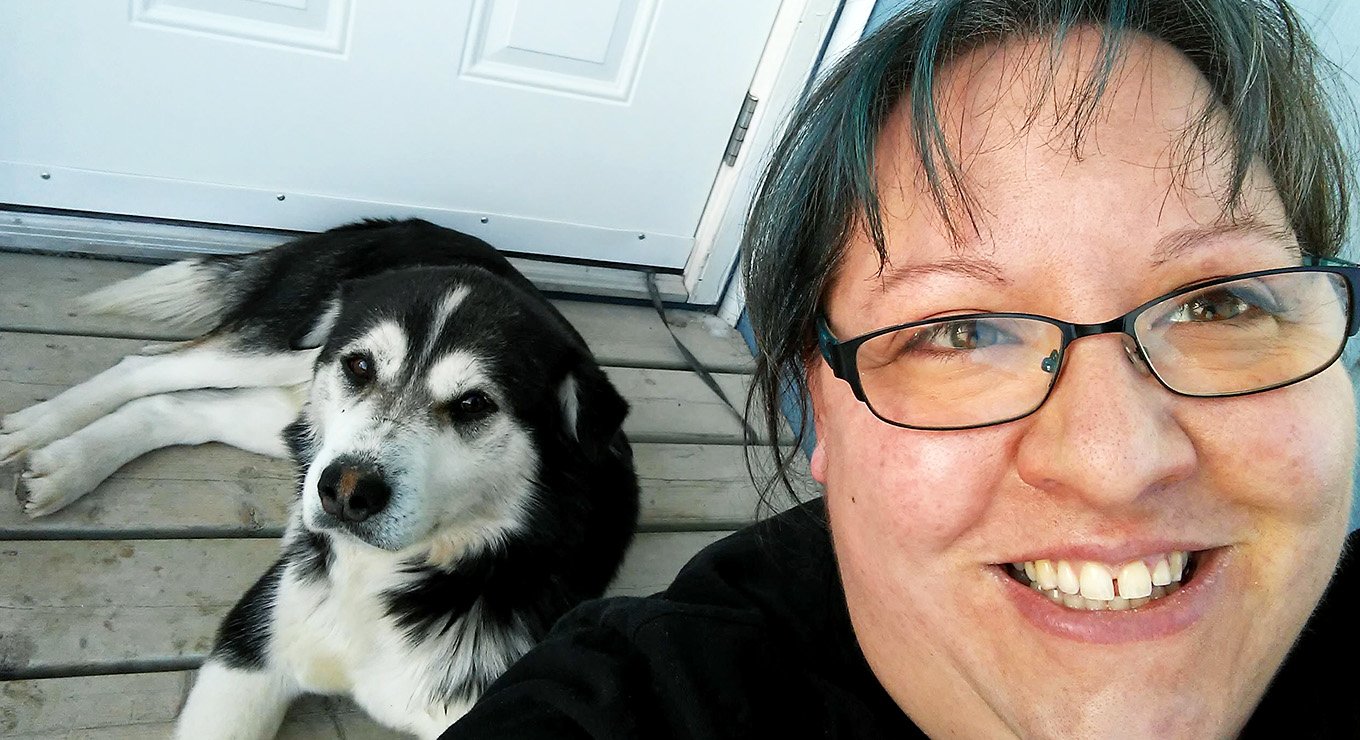 Katherine (Kata) de Sousa has been teaching grade 7/8 in Bearskin Lake First Nation since September 2017. Before applying to teach in a northern First Nation with Teach For Canada, Kata taught in China for over two years. She also worked as a substitute teacher for a number of years in the Halifax region. Kata completed a Bachelor of Arts in Theater Studies and History from Dalhousie University and a Bachelor of Education from Memorial University. She is originally from Halifax, Nova Scotia. 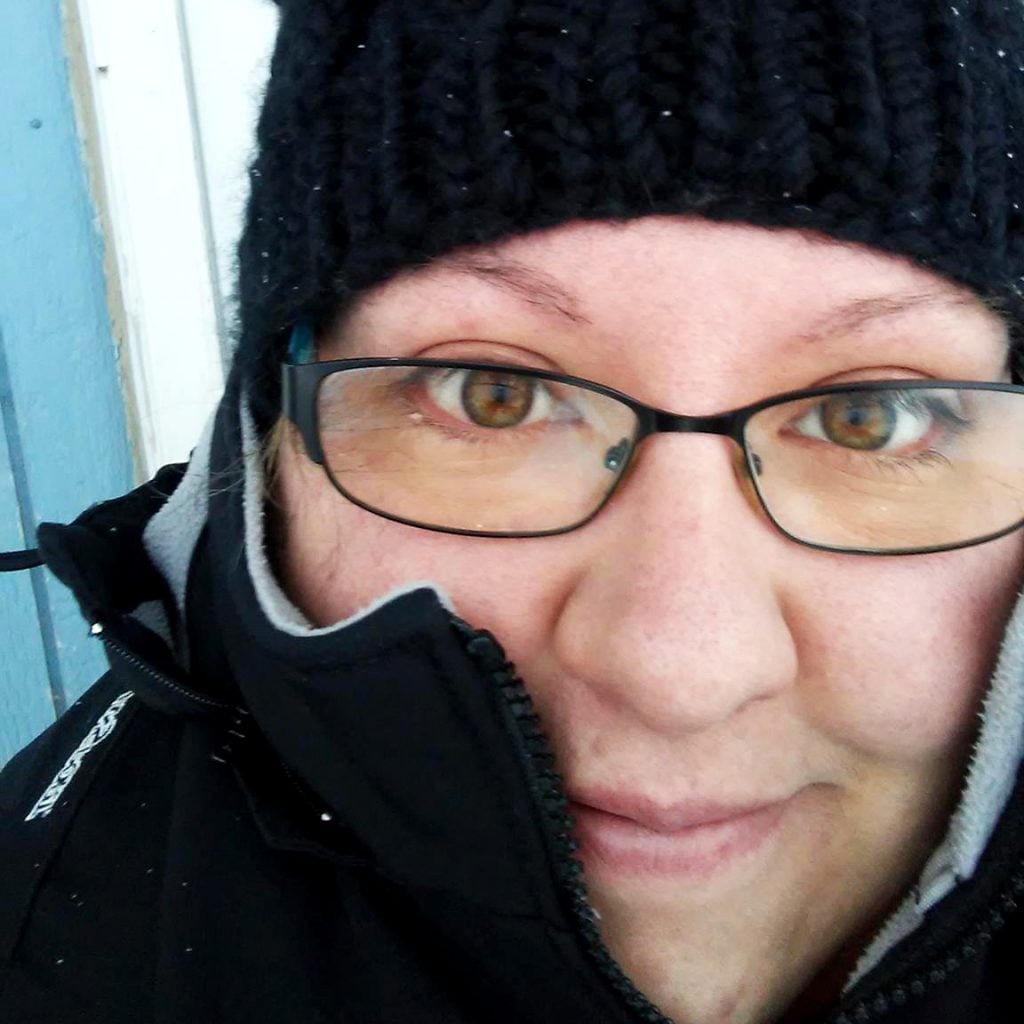 I’ve been trying to write this story for nearly eight months, and today I seem to have found my way to bring those on the outside into the little-known world of teaching in a fly-in First Nation.

Once upon a time there were three dogs.

I met these three dogs shortly after arriving in Bearskin Lake First Nation, Ontario. We were informed during our Teach For Canada preparation that there would be many “rez dogs” in our new homes. I knew before I got here that I should be wary of the dogs I met. As an animal lover, I lose my heart immediately to whatever animal is nearby. I just do. 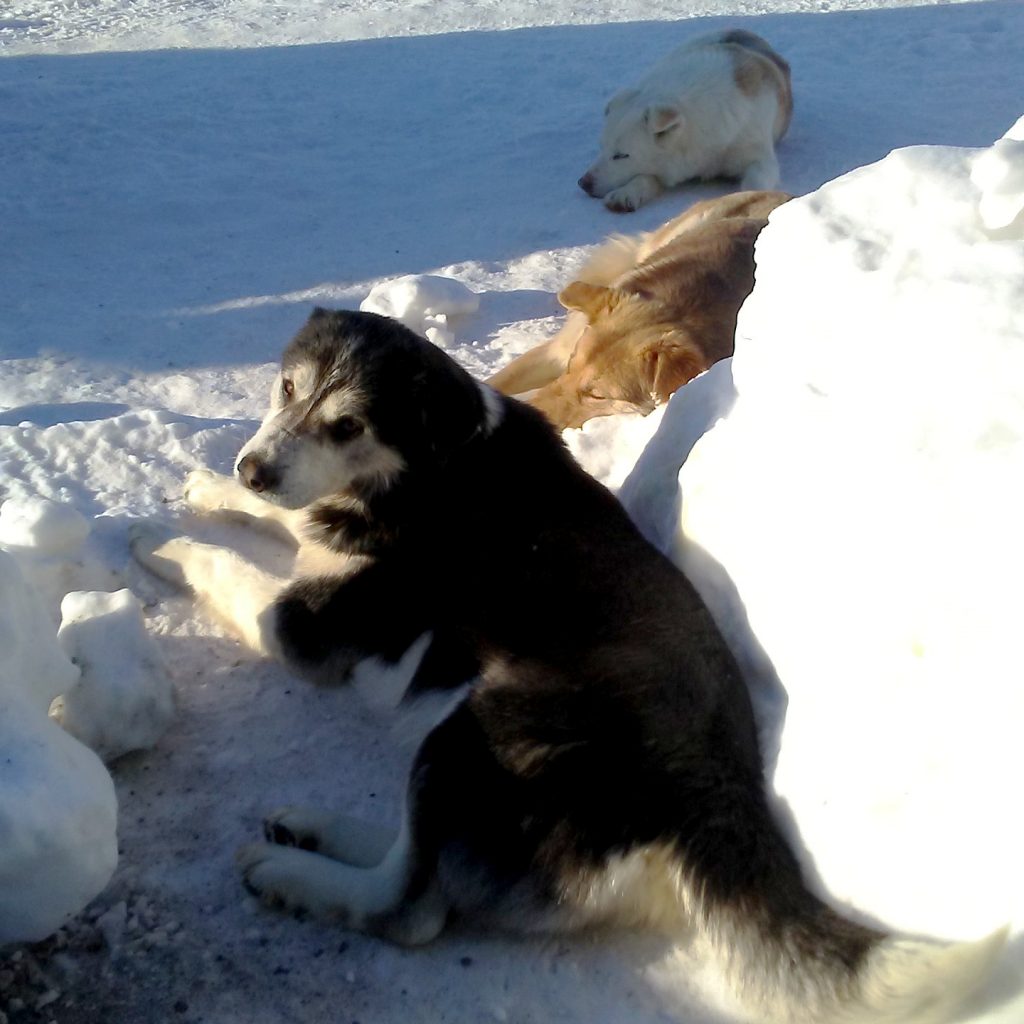 Making New Friends in the North

This trio of dogs is made up of a dominant male and two females. I tried to learn their names, but who their actual owners was and what their names were was initially rather ambiguous.  I needed to call them something, so I decided that the great black-and-white beast of an alpha male would be Brutus. He’s broad, massive pawed, and actually a real sweetheart. He was the first of the trio to roll over and ask for belly rubs. 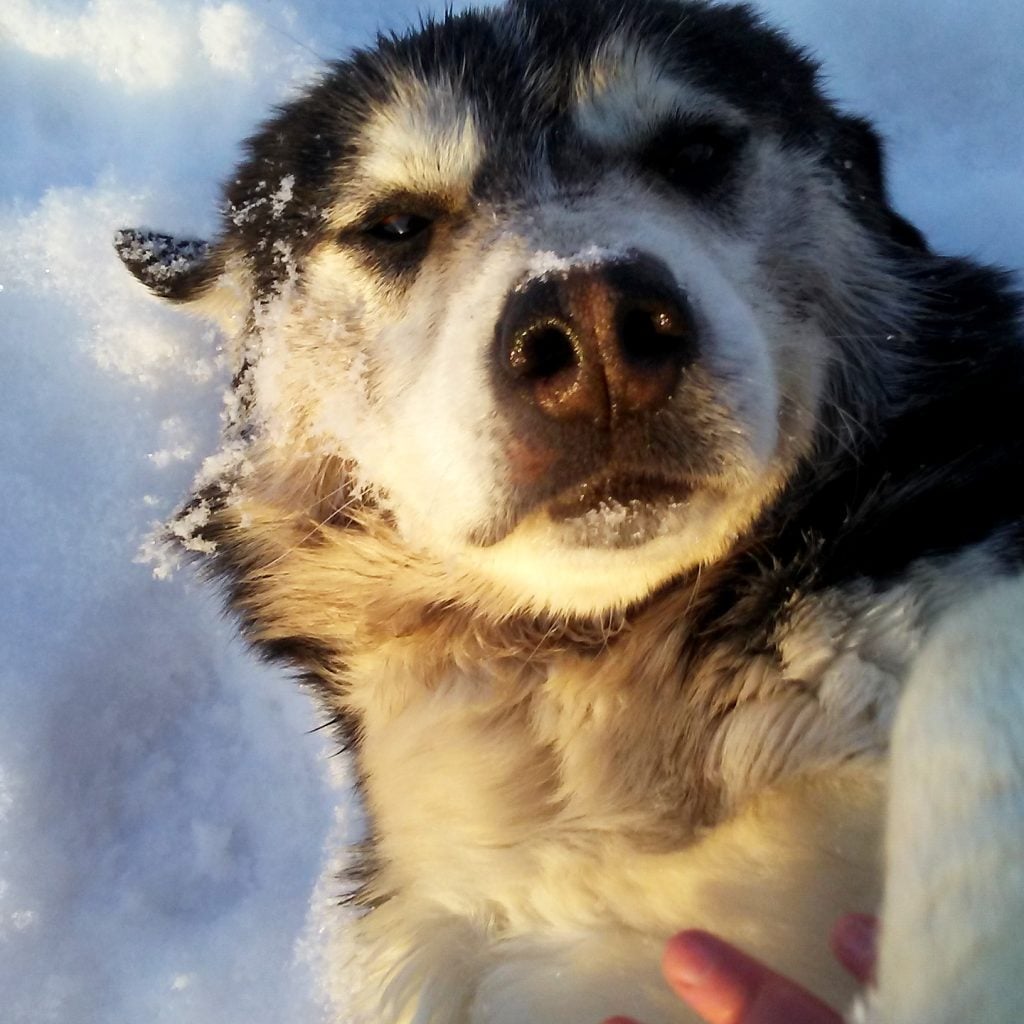 The second member of our triumvirate I dubbed Jamie. At the time I didn’t know she was a female. I named her for her multi-hued red fur, which reminded me of a favourite character from a recently popular TV show. After I realized Jamie was a she, the name still seemed to fit, so I kept using it. 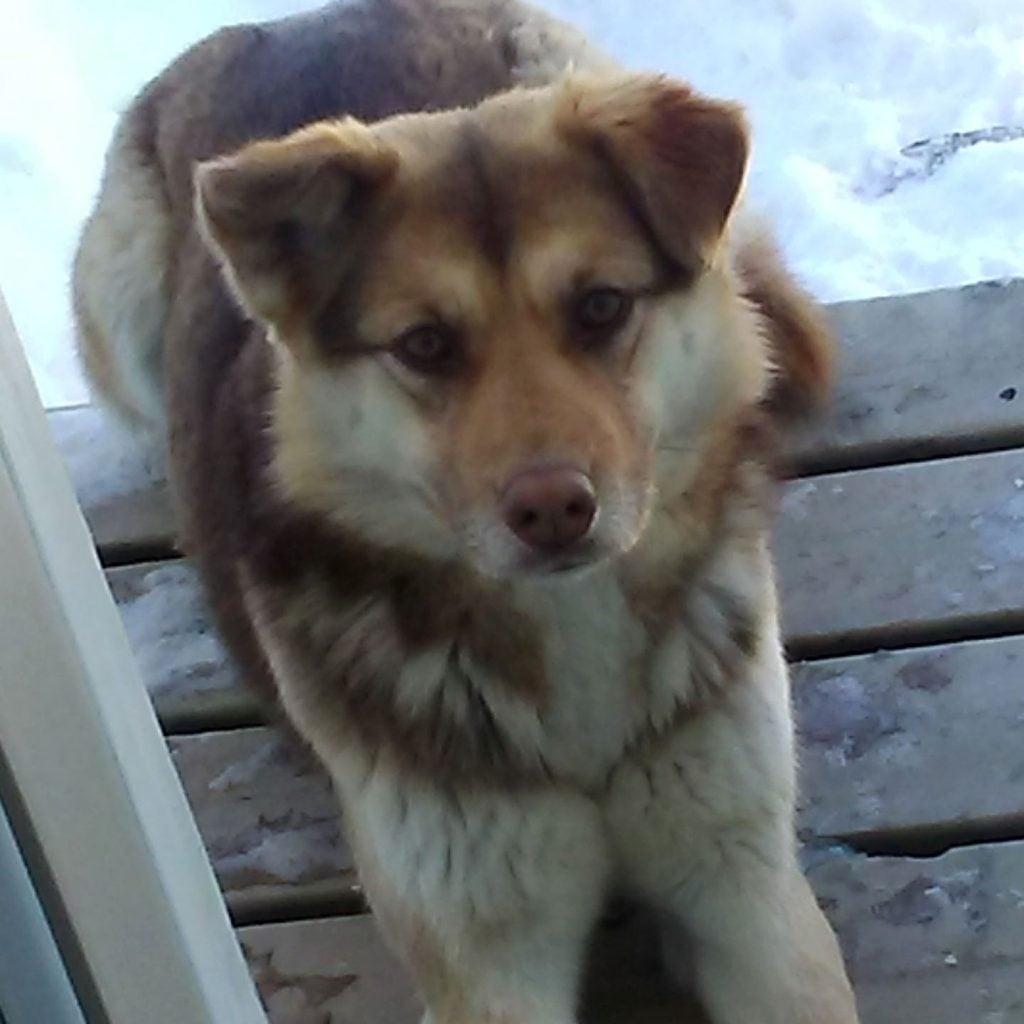 Jamie has a multihued coat

Our third musketeer is Kai, short for “Chimera”, as she seemed to be two different coloured dogs mushed together. Her head, legs, belly, and most of her back is white, but she has a huge auburn splotch across her back and tail. 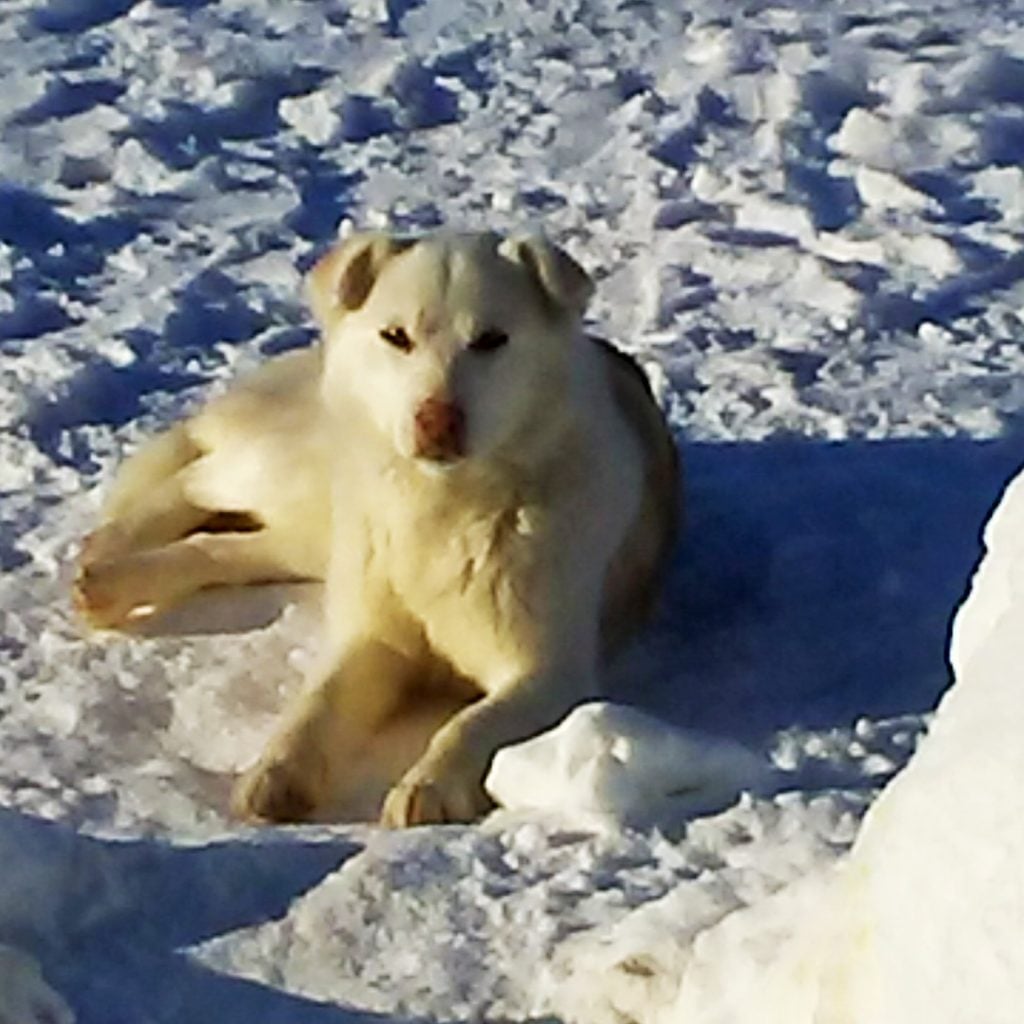 Kai’s fur is mostly white with a large auburn patch

The first thing to know is that all these dogs, like most dogs, are hungry. All the time. Because I am a sucker, I bought a box of dog treats and started keeping a few in my coat pocket in case I saw them on the way to school (which happened often in the fall) or during a recess break, or after school. After offering cookies, and even buying actual dog food and feeding them, they began to hang around the school and the teacherage, hoping for a snack.  Our relationship has developed to the point that my trick is standing at the school door and whistling three times. If they are within earshot (they usually hang out near our Co-Op store; their owner works there) they’ll come running, tails wagging, eager for a treat. We have become friends; but what that looks like is very different for each dog.

Brutus will lick your hands, let you ruffle his ears, and even offer a paw. He’s the most affectionate of the bunch. He’ll even roll over and paw the air, universal dog language requesting belly rubs. This is a huge sign of trust. Don’t try to stroke his back, or head…he wants belly rubs, and that’s it. He’s willing to be vulnerable in that way only. 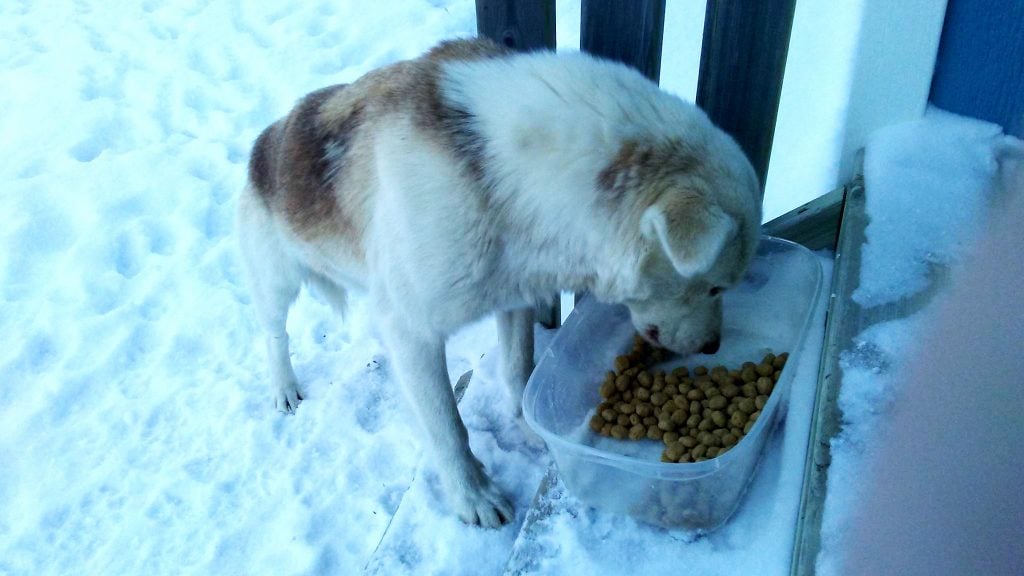 Jamie is much, much more skittish. She’s less dominant (her tail is often between her legs), and it took many weeks of speaking softly, moving slowly and deliberately, and offering cookies for her to stay when I took a step toward her. Now, she’ll come right over when I whistle (if I’m alone), and the first day she licked my fingers in greeting was a fist-pump, brag to all my friends, I just won the lottery kind of feeling!

Kai is the least physical of the group. Often hanging back, watching the others, and hoping to sneak in for a treat when the others aren’t pushing her away. She has graduated to finger-sniffing to say hello, and as you can imagine, that was a fantastic day.

It is the highlight of my days, especially the discouraging, frustrating, or enraging ones, to open the school door, feel the blast of frigid air on my face, hear my own whistle echo seemingly forever across the frozen lake, and watch these three beautiful creatures come bounding toward me, all wagging tails and doggy smiles. (Yes, I am well aware that some people believe that dogs don’t have feelings, and that some people believe this behavior is entirely food motivated. But it heals my heart to imagine I am loved by these dogs, and so I will continue to believe it is true.). 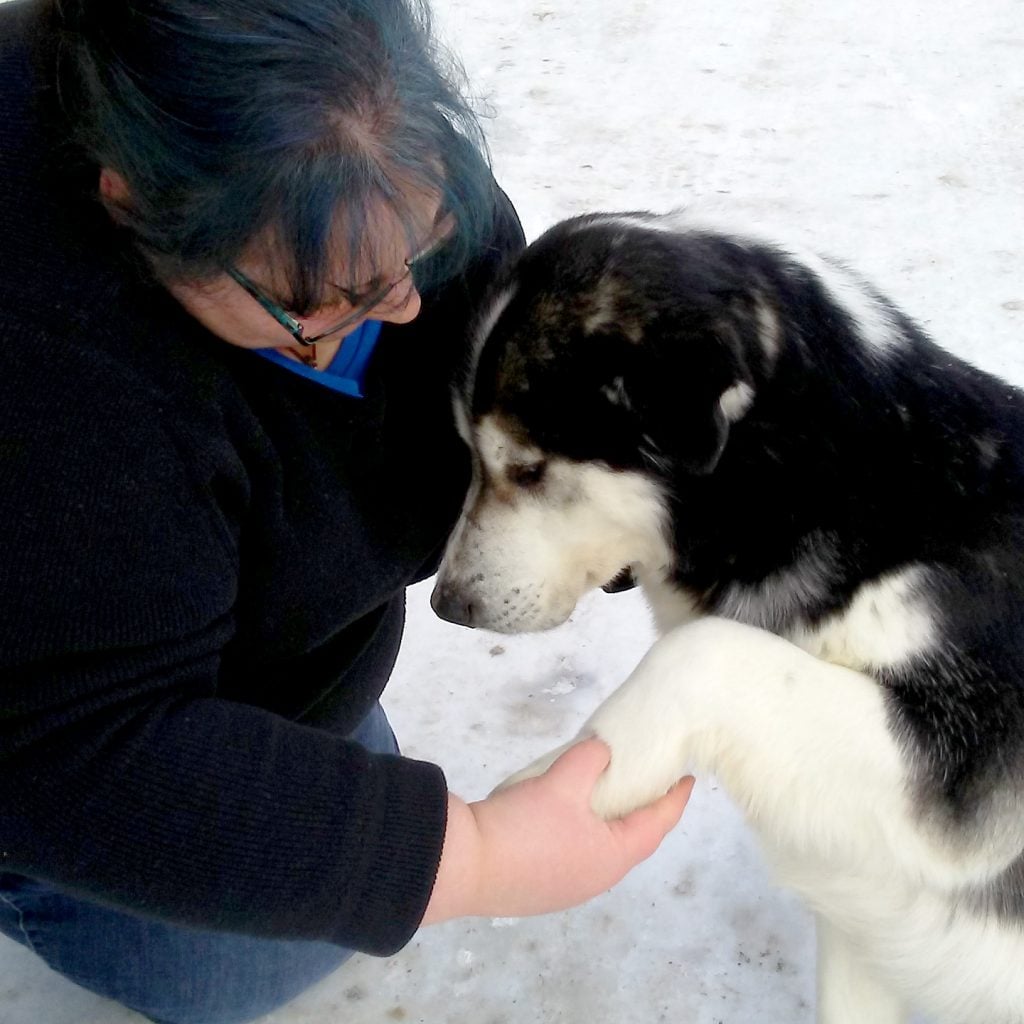 Brutus learned how to shake paws with Kata

As our relationship has progressed I have even taught this trio to sit for treats and not to jump up on people who might have food. It’s not always successful, but I have watched these three clever animals figure it out. Kai, especially, took some time to learn. She would watch Brutus and Jamie, and I could practically see the doggy thoughts in her head, trying to figure out what behavior was going to get her the cookie. She has gotten it and I’m very proud. Brutus and Jamie have had struggles, too. Brutus has a waggly, manic energy, so it is a real feat for him to sit still long enough for the treat he wants so badly. Jamie was the first to learn, but struggles with her own fears and lack of confidence. If there are other people around and too much noise, she’ll lose her nerve and won’t try for a cookie. 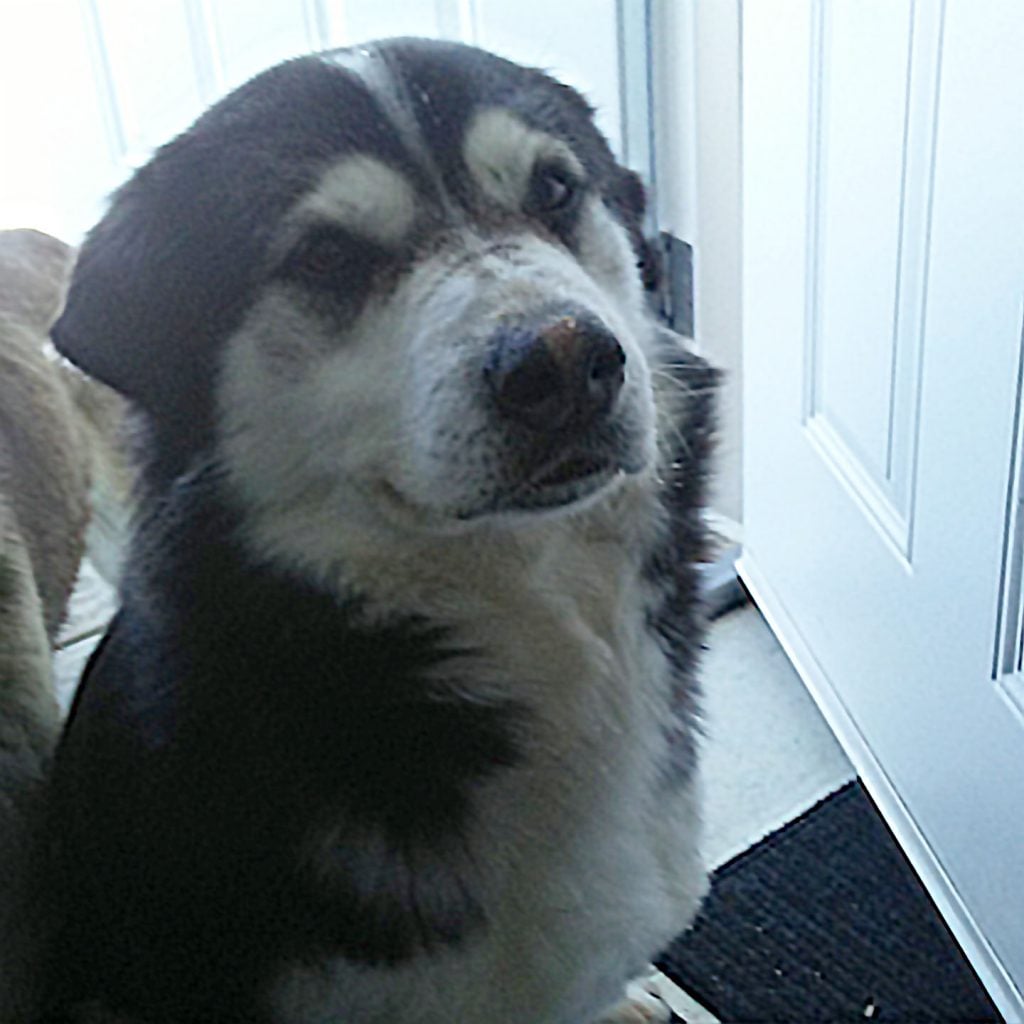 In the beginning Brutus could only take the cookie if you threw it up into the air and he caught it. He was too rough and eager and would bite your fingers. As he calmed down over time he wouldn’t jump or snap at your fingers, but he would still turn his head away if you offered the cookie near his nose. I’m delighted to say he’s progressed to taking the cookie from my fingers, but I have to read him and see if he’s calm first. If he’s too excited he doesn’t remember “gentle” and I end up with stinging fingers.

Jamie went from taking the cookie from the ground if you threw it, to sitting and jumping for it in the air, to finger-licks to say hello, to taking the cookie very, very gently from your hand, to eating from a bowl placed inside the door, but no petting. She’s just not able to do that.

Kai will jump for the cookie after sitting, even though she’s not very coordinated and often doesn’t catch it, she’ll sniff your fingers hello and sometimes lick, but most importantly, this dog who won’t let people touch her will actually roll on her back for belly rubs if she feels safe. It was truly amazing to watch her contort herself and try to roll over, but still try and stay standing because she’s afraid. We’ve managed full belly rubs a few times now, and I always feel grateful that she trusts me. 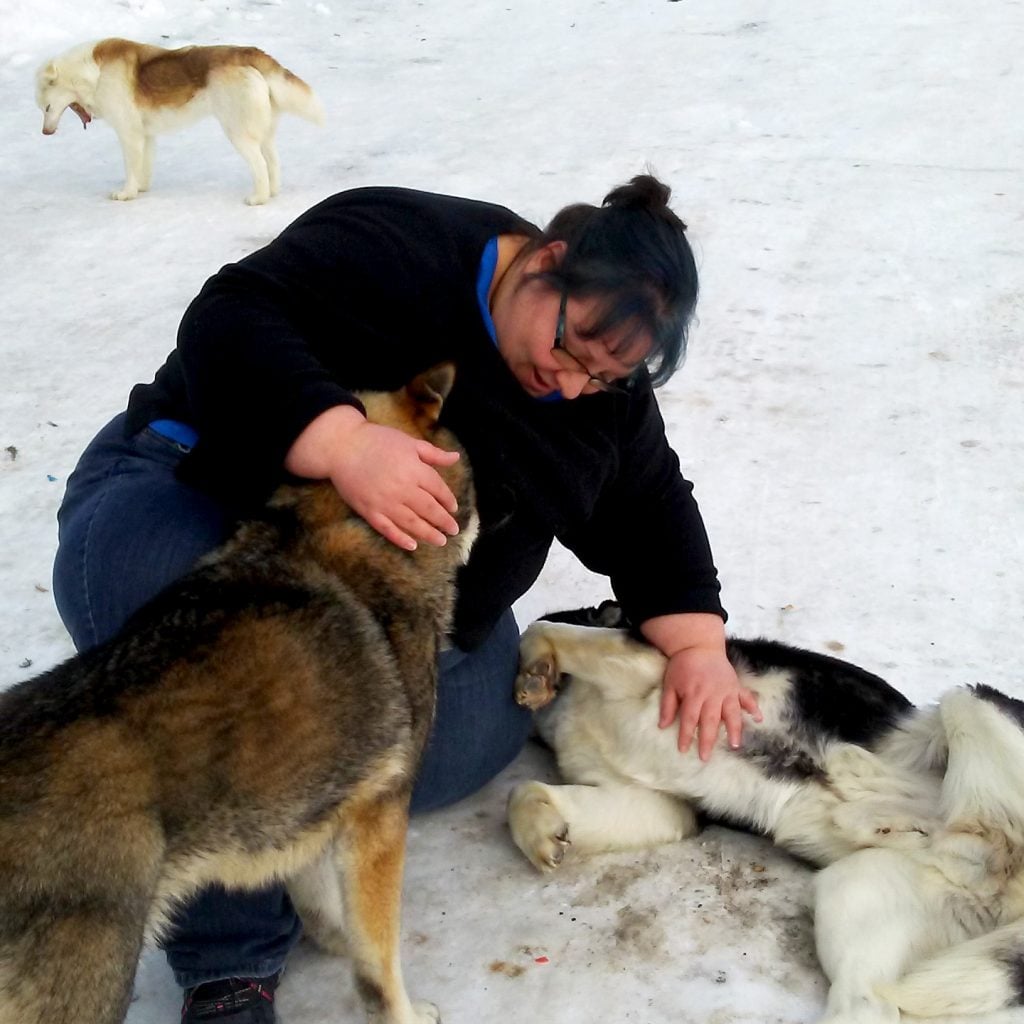 Some people might think this is an awful lot of effort for very little, and very individualized, progress. Where are the face-licks, snuggles, fetching, and all the other behaviors people think of when they imagine a relationship with a dog? This is the metaphor that has been following me around on twelve paws since I came to Bearskin Lake. 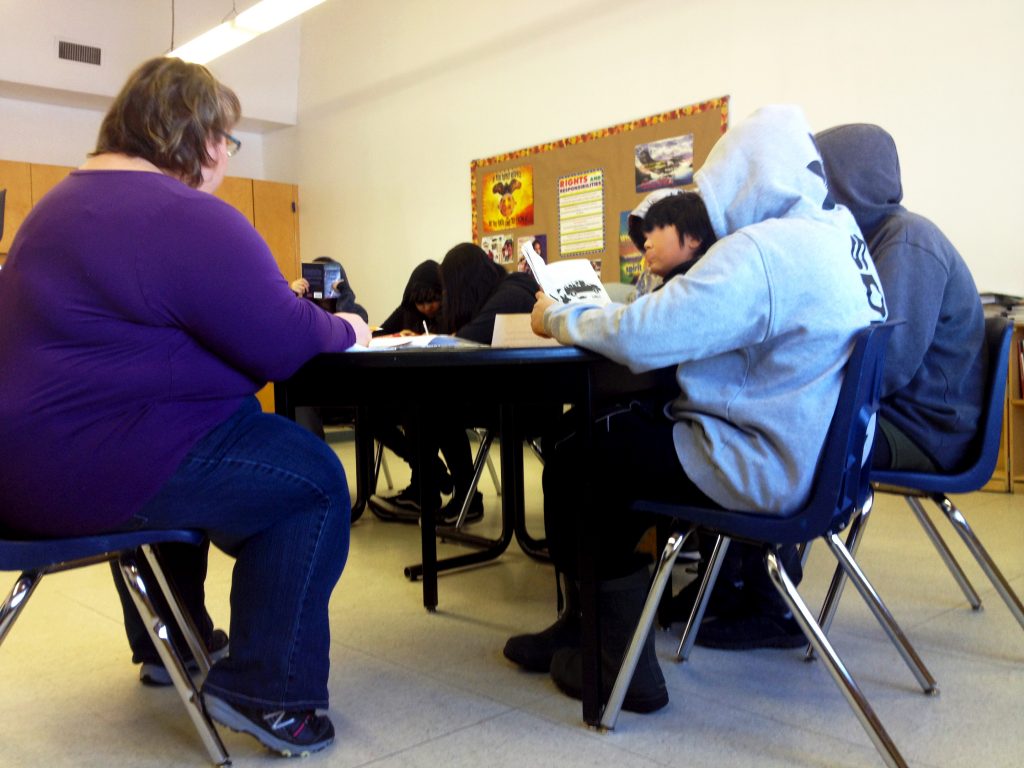 Kata working with her grade 7/8 students

When you live and work in the North, there are many things that will possibly make you crazy. Your students will not necessarily act like the students you are used to, or the ones you imagine you’ll have as a new teacher. They will do and say things that will amuse you, sadden you, and sometimes just perplex you. Not all your students will be at grade level. Not all your students will show up regularly. Each one will have their own ideas about what they can and cannot do; what they are willing to try, and where are the lines they won’t cross. You may teach more about a single subject than you thought you would, or miss some subjects altogether.

Each of your students will have a unique (and sometimes sad) journey to that chair in your classroom, and you will have to learn from them.

You will not take a class with challenges and turn them into a group of Rhodes Scholars in a month, or even a year, but you can reach them, all of them, in some way. Progress will be individual, it will sometimes take enormous amounts of work, it will not necessarily feel rewarding at the time, and it might not look how you expected it to.

Progress looks different in the North. Expectations are different in the North. Closing the education gap, and healing the relationships between settler and Indigenous peoples is going to take time; a long time. More time than my short-lived attention span can often understand. I think it will be a more organic process than I had ever imagined, not with hair-on-fire sweeping changes, but with brick-by-brick building. Teaching in the North may be the hardest thing you ever do, but that doesn’t mean it isn’t worth it.