The Elder, the Teacher, and the Beaver: One Teacher’s Learning Story in Sachigo Lake 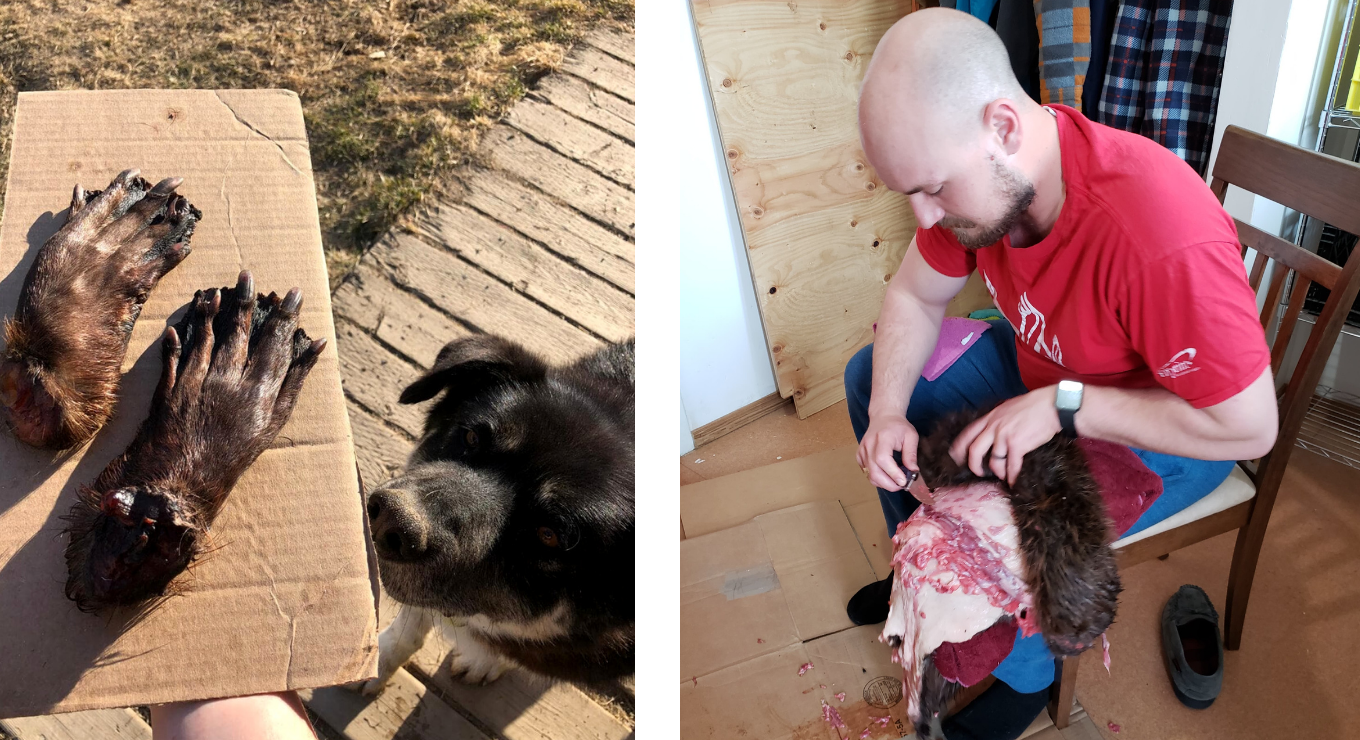 Steeves Guild is a grade 3 teacher at Martin McKay Memorial School in Sachigo Lake First Nation.  2021 marks Steeves’s second year with Teach for Canada. He’s been with the organization since graduating from Teacher’s College in 2018 and credits Teach For Canada for providing him with the opportunity to start his teaching career in a northern First Nation.

Elders serve a vital role within Indigenous communities. They are Knowledge Keepers who ensure that skills, traditions, and customs are passed down from one generation to the next. Not only are Elders pillars of their communities, but they also serve as teachers and leaders who foster unity and act on their duty to give back.

Elders are instrumental in the sharing of cultural knowledge and passing down lessons of all sorts. In the case of one Teach For Canada teacher, learning how to traditionally skin a beaver from an Elder in his community has been an exciting and meaningful journey.

The beaver is a national symbol of Canada, and yet, many have never seen one before. Though this wasn’t the case for Steeves, learning the skills necessary to successfully skin a beaver traditionally has required listening, patience and practice. 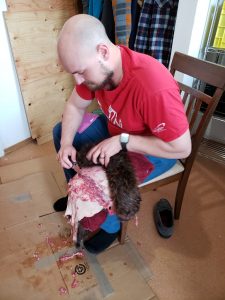 While working as a teacher at Martin McKay Memorial School in Sachigo Lake, Steeves met Rosemary, an Oji-Cree Elder. When they met, Rosemary worked as the school chef, preparing breakfast and lunch for the students each day. On his way to class in the morning, Steeves would greet Rosemary with an enthusiastic, “Hello, Kookum.”.

It wasn’t long before Rosemary was responding in kind, dubbing him her honourary grandson. The relationship grew over the months, and by the winter holiday, Rosemary had gifted Steeves and his partner a beaver-skin hat and gloves.

Rosemary’s gift meant a lot to Steeves. It made him feel that he had truly been accepted into the Sachigo Lake community.

One early March day, during Sachigo Lake’s annual hunt week, Rosemary returned to Sachigo with a beaver. She asked Steeves to skin it, and he enthusiastically accepted. Steeves had learned early on that you never say no to any kind of experience up North. 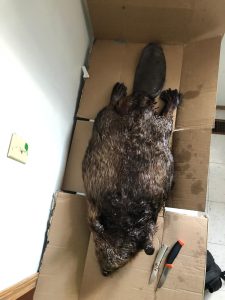 The beaver, ready to be skinned.

Steeves returned home that night, threw on a couple of YouTube videos on how to skin, slice, and quarter up a beaver, and felt ready to go. The next day, he reported back to Rosemary that he’d successfully learned how to skin a beaver. In hindsight, this might not have been the wisest statement to make in the presence of a skilled trapper.

She encouraged him to go ahead and demonstrate what he’d learned. After school that day, Steeves collected the beaver, brought it home, and got to work. Once he had removed the animal’s hide and feet, he sent Rosemary a picture, claiming to be finished. Rosemary came over and proceeded to show Steeves how to properly cut off the meat and finish the process. 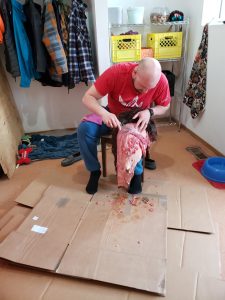 In addition to Rosemary, Steeves received several tips from other school staff members, which helped him during the next step of skinning: the boarding process. Steeves learned how to construct the board, and properly nail down, shape, and soften the skin. After all was said and done, Steeves was left with a finished beaver pelt on the wall of his home.

The process of traditionally skinning a beaver 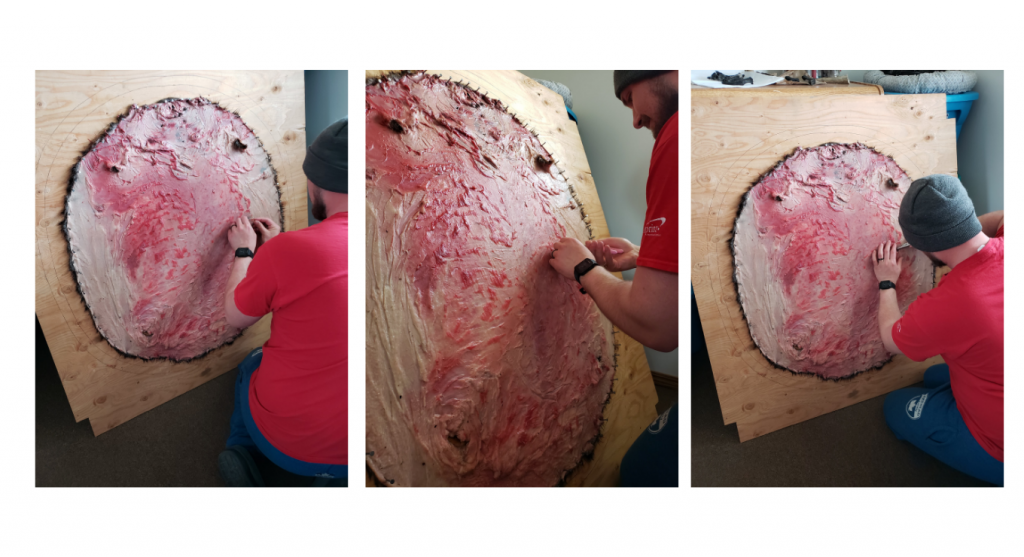 Steeves removing residual fat from the pelt after boarding it.

First, remove the feet. Make a straight cut from the base of the tail, along the belly, to the bottom lip. Then, begin pulling back the skin, cutting gently until the pelt is completely removed.

While carefully holding the pelt, use a knife and a flat tool to slice and cut away any extra meat or fat from the pelt.

On a large board (Steeves used plywood) trace several large ovals to use as guidelines. Stretch the pelt, and nail it to the board. As the hide dries, continue to scrape away any fat that might have been missed in the fleshing process. After a few days, raise the hide to the top of the nails to allow for airflow so the fur side dries as well. In time, the hide will dry and can be removed from the board, resulting in a perfect beaver pelt. 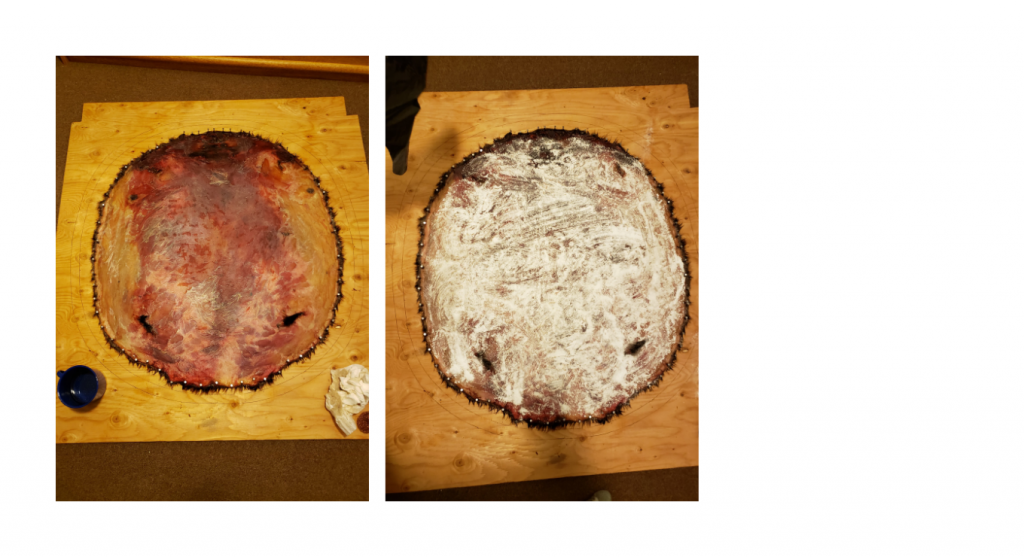 The drying pelt, after skinning, fleshing, and boarding.

The Influence of Elders

When asked about the influence of Elders on his life in Sachigo Lake, Steeves had nothing but praise to share.

“Rosemary has done much more than coach me through how to skin and cut up a beaver,” Steeves says. “She taught me how to clean a fish, ducks and geese, skin all six of the rabbits my students and I trapped this winter, and skin and section a moose.”

From Steeves’s experience, it’s clear that building relationships with community Elders has been an invaluable way to get the most out of his time up North. He urges new teachers to get their hands dirty and recognize the wealth of cultural knowledge at their fingertips.

“To truly grow as an individual and a teacher, you need to be open to new experiences. Integrate yourself into the community and create your own learning story!”

As for Steeves, now nearing the end of his second year with Teach For Canada, he has more to be proud of than the beaver pelt on his wall. He has new knowledge, meaningful learning experiences, and cherished memories with his chosen family in Sachigo Lake.

Interested in learning more about living and teaching in a northern First Nation? Read our FAQ.