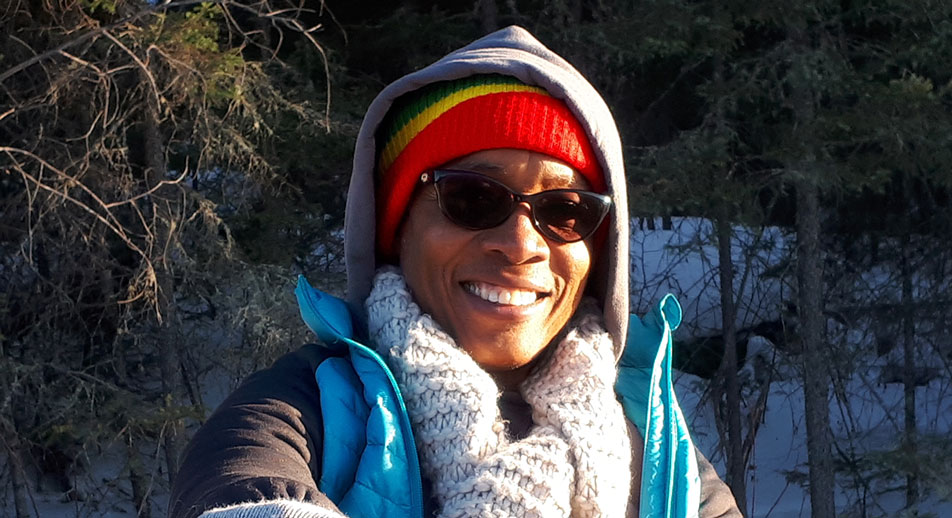 Pauline Davis has been teaching high school in Grassy Narrows First Nation since September 2017. Pauline has a Diploma in Teaching from Moneague Teachers’ College, a Bachelor of Arts from the University of the West Indies, and both a Master of Science in Educational Leadership and a Master of Science in Language Arts and Reading from Central Connecticut State University. Pauline has nearly 25 years of teaching experience. Pauline and her husband Oral are both from Jamaica and settled in Canada in 2013. 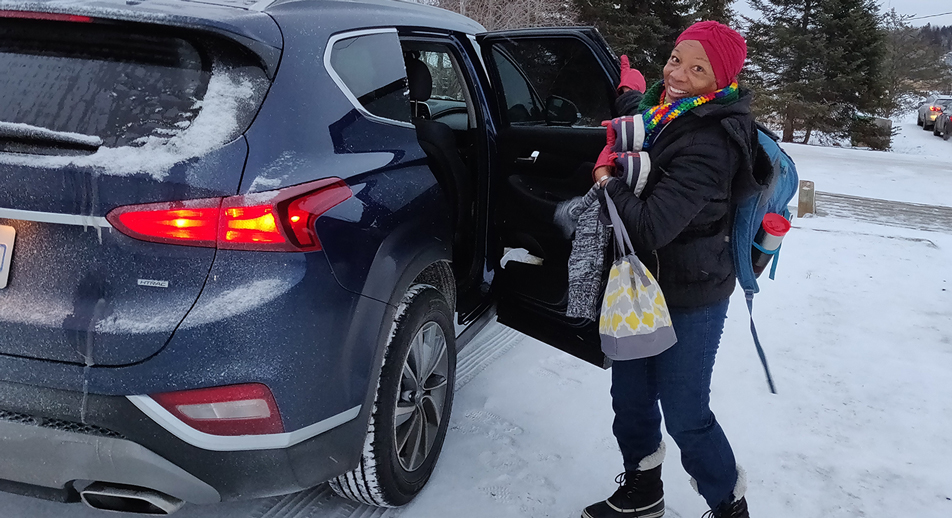 Pauline and her husband Oral took on a big adventure moving North to Grassy Narrows First Nation in 2017.

Pauline Davis likes to build bridges between destinations, and with people and cultures, which is fitting since her roots originate on the island of Jamaica. How Pauline and her partner, Oral Davis, built their latest bridge to Grassy Narrows First Nation is a long-time journey in the making. 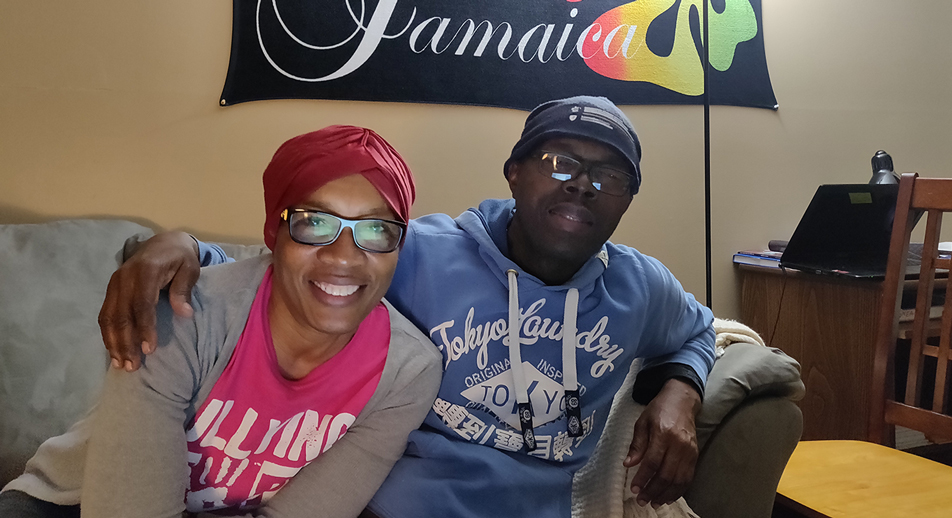 Pauline and her husband Oral decided to move to Canada permanently in August 2013.

Pauline and Oral both had professional teaching experience in Jamaica and had visited Canada several times since the 1980s because Pauline had a sister and other relatives living in the greater Toronto area.  The Davis’ decided to move permanently to Toronto and call Canada home in August 2013. While the move to Canada was considered a permanent change, Pauline continued to travel back and forth to Jamaica for personal and professional reasons. 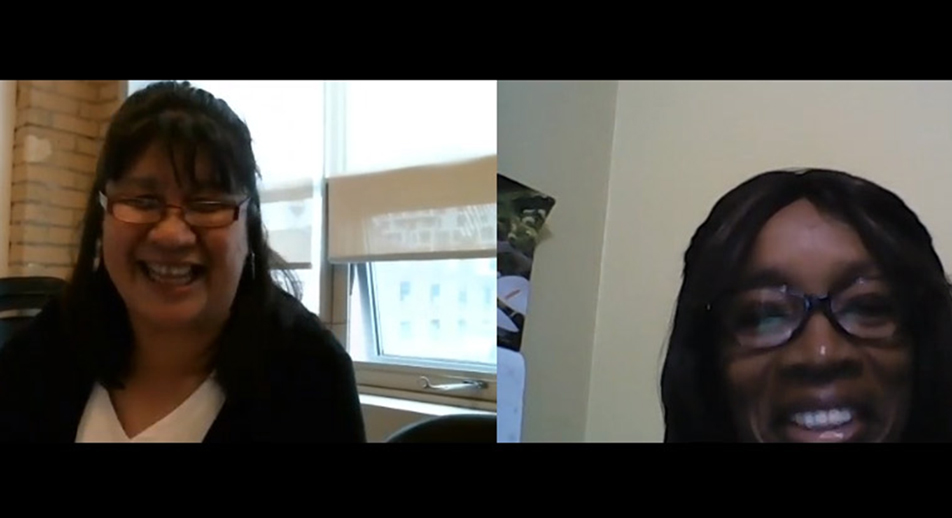 It was only when Pauline discovered Teach For Canada in 2017 that she began to feel settled in Canada. The opportunity to teach in Canada was finally going to become a reality. Pauline remembers how Teach For Canada’s response to her application gave her confidence and hope about her career here. She made it through what she describes as Teach For Canada’s “unique process with rigorous interviews,” which helped make sure Pauline was truly prepared to teach in the North. 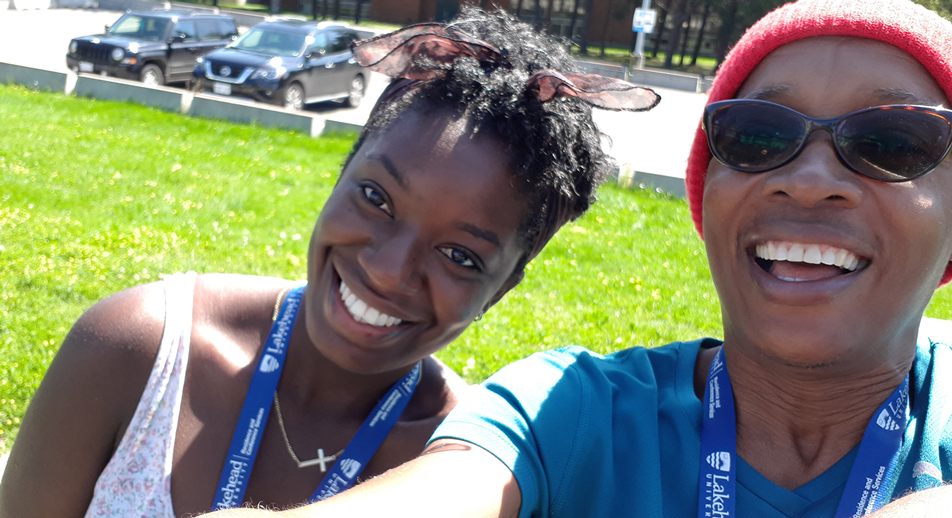 Pauline met another Teach For Canada teacher from Jamaica, Aissa, at the Summer Enrichment Program (SEP).

When Pauline headed to Teach For Canada’s Summer Enrichment Program (SEP) she flew Porter and discovered the Toronto Island Airport for the first time. It would be the start of many new “firsts” for Pauline. While she was waiting to depart for Thunder Bay, Pauline had the good fortune to bump into another Jamaican teacher and successful Teach For Canada applicant, Aissa. 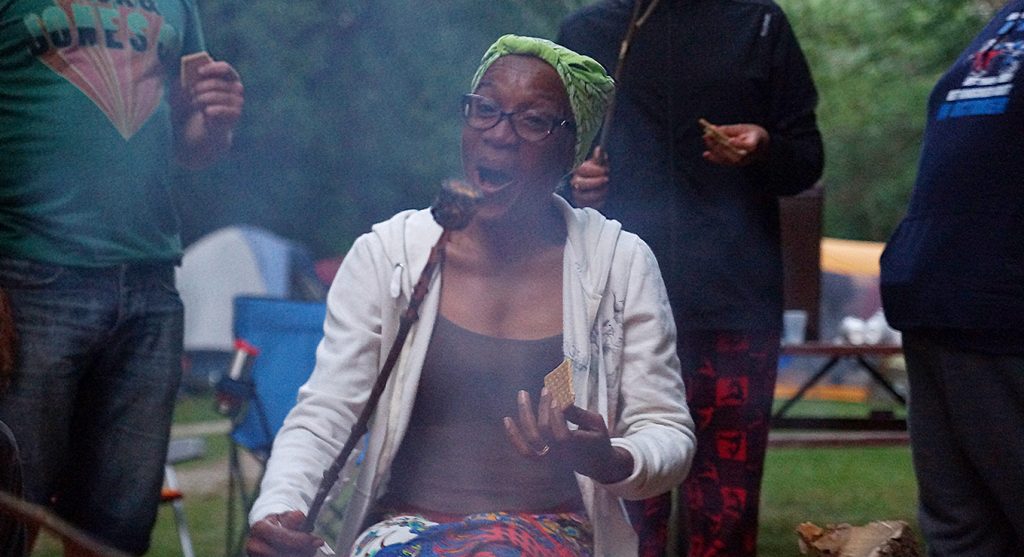 Pauline experienced many “firsts” during SEP, including trying her first roasted marshmallow.

She also realized that many aboard her Porter flight were also headed to SEP, including a Teach For Canada staff member who helped with the recruitment process, which made for good company. She had read the teacher profiles for her cohort, which had been sent out in an email in advance, and gave her the confidence to continue her journey. 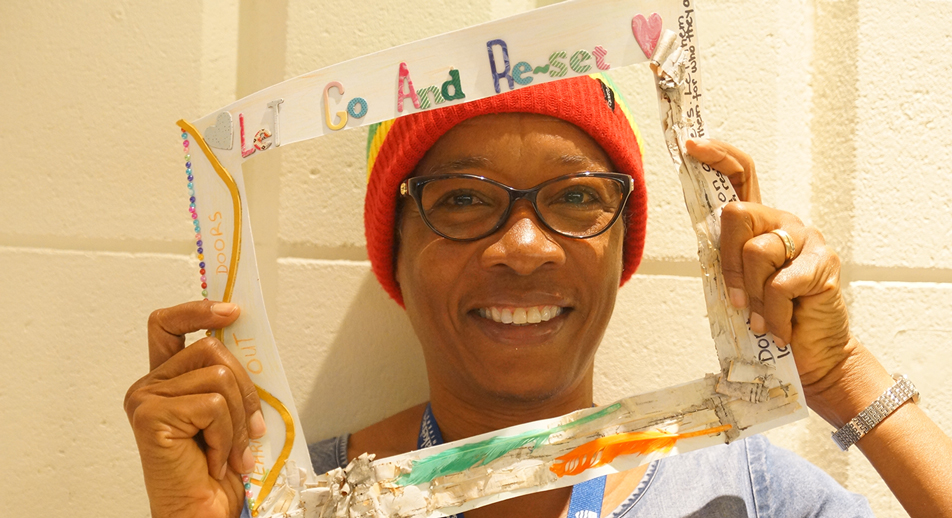 Pauline set her intention to “Let go and re-set” at SEP as she looked forward to the next two years.

The SEP training “was surreal” for Pauline. She remembers thinking: “Do I really know what I’m getting myself into?” But Pauline used the SEP experience to remain flexible and adjust her perspectives as she learned more about First Nations. She reminded herself to be open, flexible and adjust to situations quickly. She knew a good way to learn was to observe a lot. 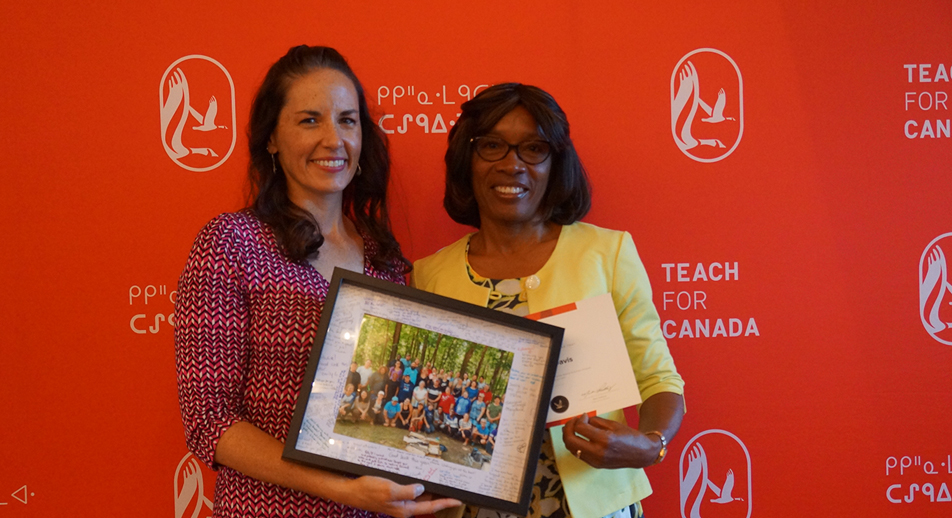 Pauline with Teach For Canada’s Director of Teacher Development, Liz Halina during the 2017 SEP closing ceremony.

This perspective continued to benefit Pauline when she moved to Grassy Narrows First Nation. Pauline admits she “didn’t see the whole picture” of going North, and knew of some of the stereotypical views some of her acquaintances held about it. Having first-hand experiences in the community really pressed upon her the value of seeing things for yourself. Pauline is proud to share her experiences and stories to change people’s perspectives. 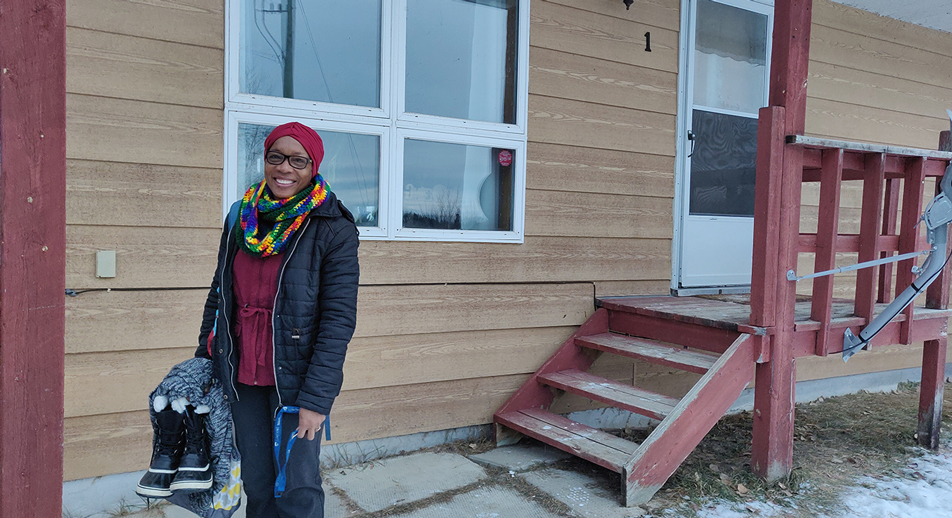 Pauline stands outside her teacherage in Grassy Narrows First Nation. 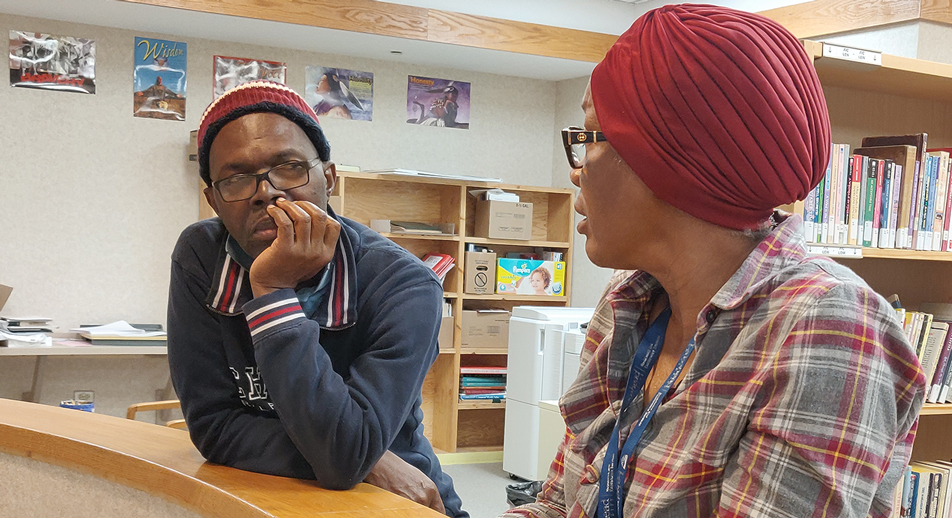 Pauline and her husband Oral both work at the school in Grassy Narrows First Nation together.

While it hasn’t always been easy, Pauline often reminds herself: “Why am I here? – my focus is on the students and giving my best to them.” She reflects at the end of each day and knows not to focus on the negatives. While she doesn’t ignore them altogether, she chooses to highlight the positives, which helps overcome the heavier stuff. Oral agrees, saying: “Even though there were some challenging experiences while working for the school, it has been a great opportunity to contribute to the school environment in a positive way.” 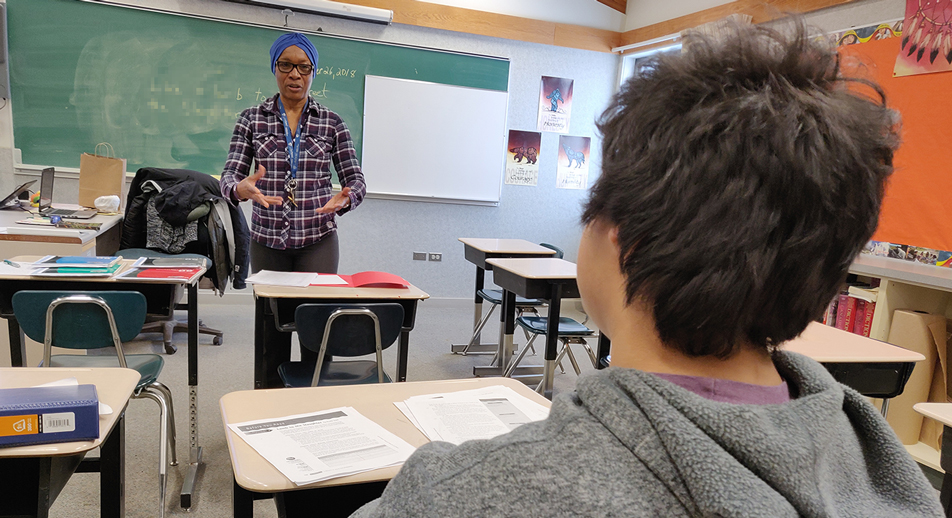 When Pauline faces challenges, she focuses on giving the best of herself to her students.

Both Pauline and Oral learned that the best way to connect with students was to meet them “where they are.” When Pauline realized students were discouraged by corrective feedback and marks, she encouraged them to focus on writing drafts, revisions, and re-writing instead. 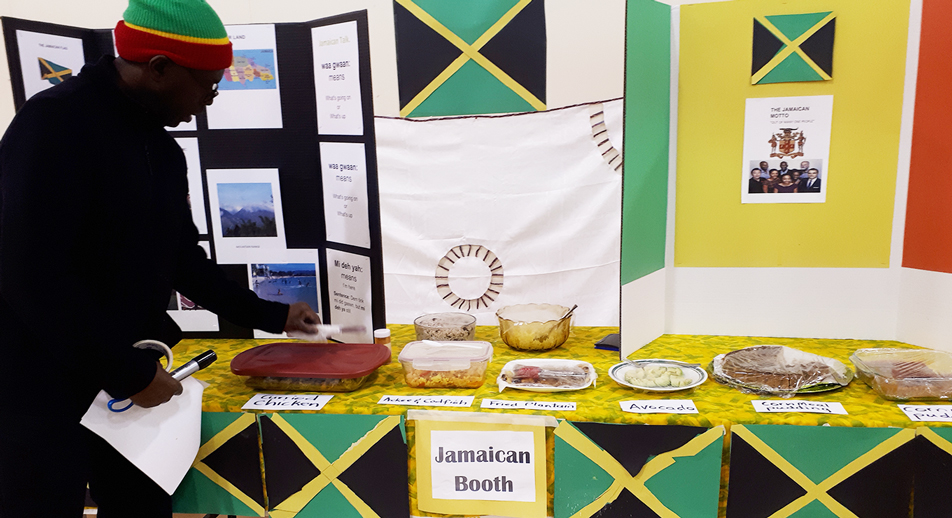 Pauline and Oral set up a Jamaican booth during their first Culture Day.

As for making a home in Grassy Narrows First Nation, Pauline and Oral have found it important to participate in community events and activities as much as possible. At their first Culture Day, they both set up a booth to share Jamaican culture and food. Pauline also took part in a sewing class held at the school where she learned how to make her own ribbon skirt. 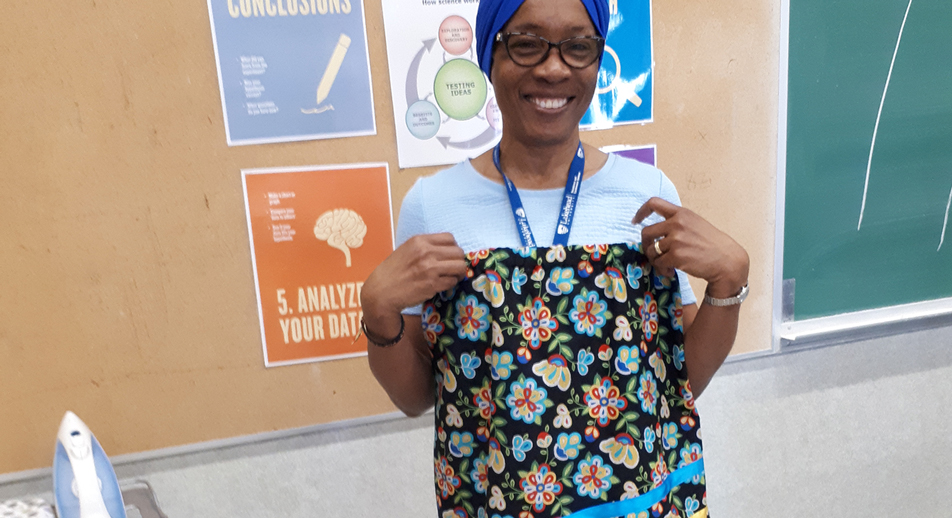 Pauline attended a local sewing class and learned how to make her own ribbon skirt.

Pauline loves the community’s beautiful outdoors and says it is therapeutic in helping her recharge and find balance with her work. Whether she goes out onto the lake, or spots a bear or a fox, “it gives you a thrill” that can become moments she shares through pictures with family or friends. She’s also forged a close friendship with fellow Teach For Canada teacher Aissa, whom she first met at the Toronto Island Airport, despite the fact that she teaches in another northern community.

Pauline and Oral have found a home in Grassy Narrows First Nation.

Pauline continues to challenge herself in a new environment and looks for opportunities to push her limits while living and teaching in Grassy Narrows First Nation. “I like it because I grow,” she says.